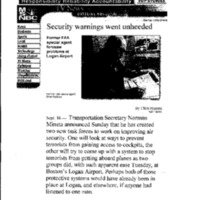 A news article that discusses the many ways in which Brian Sullivan attempted to enact safer security measures at airports prior to the September 11, 2001 attacks. Sullivan, a former special agent for the Federal Aviation Administration (FAA), worked with a local television crew to expose gaps in security at Logan Airport in early 2001. Unfortunately, Sullivan's work did not provide the impetus to rework security measures, so in August 2001, he wrote a letter to Senator John Kerry to express his concerns. Kerry asked the Department of Transportation's Inspector General to investigate, but the FAA responded that they were continuing "to address security issues raised by the video presentation." Three weeks later, the September 11, 2001 attacks occurred.