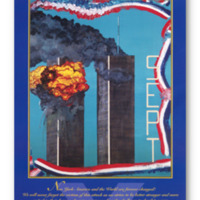 I am an artist from Sea Cliff, New York, located on Long Island Sound. My daughter and I stood in the park at the end of Sea Cliff Ave and we could see the smoke coming from the World Trade Center. On the morning of Sept 12 we could smell the smoke this far away.
I have been painting about the impact that rapid change has on society for about five years. I did a painting of Sept. 11 from the perspective of global, systemic, rapid change. This was the second time that I had experienced an event that qualified for this category. There are about 40 paintings in my change management series but there are only two in my special category of global, systemic, rapid change. Y2K and Sept 11 are both moments in time that created global, systemic, rapid change.
The idea of terrorists using weapons of mass destruction is now thinkable and the world must respond. In WWII Japan used suicide bombers and the United States responded with two Atomic bombs. The US and Russia fought the cold war for many years because the thought of nuclear war was unthinkable. MAD, mutually-assured-destruction created a balance of power stalemate that allowed the world to survive the early years of the nuclear age. Now it appears that terrorists feel that they can use weapons of mass destruction successfully by attacking from the shadows. The United States and the World must and I think will respond to Sept. 11 in the same way we responded to the attack on Pearl Harbor. The idea of an attack such as Sept. 11 must become unthinkable in the minds of the terrorists and all those who applaud their actions.
My poster is a memorial to all those who lost their lives on Sept. 11 but it is also a warning or reminder to those of us who remain to grab hold of its significance. We, the United States and the World must develop a new balance between freedom and securtiy.
I am including an attachment of my poster and you can view it, as well as read about it if you go to FredBenyo.com.
Sincerely,
Fred Benyo